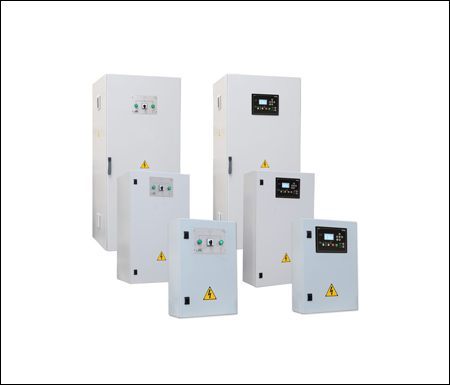 Application
A transfer switch is an electrical switch that switches a load between two sources. Some transfer switches are manual, in that an operator affects the transfer by throwing a switch, while others are automatic and trigger when they sense one of the sources has lost or gained power.

An Automatic Transfer Switch (ATS) is often installed where a backup generator is located, so that the generator may provide temporary electrical power if the utility source fails.

Operation principles of a ATS Panels
Ordinarily, normal power is provided by a utility company and connected to onsite applications. When the primary power source has ceased to work, power from a new or used generator can be either manually or automatically transferred to the onsite application via a transfer switch. A transfer switches’ primary job is to redistribute power from a grid to a backup source of power. This article will explain how the control panel directs an automatic transfer switch.

The control panel system of a transfer switch is what makes the unit automatic in nature. Manual transfer switches are operated by onsite personnel and are used in situations where the load is not of an emergency nature requiring immediate restoration of the power supply. With an automatic transfer switch, power failures are detected immediately and the transition from utility power to generator power is seamless. The control panel’s job is to detect a power failure and initiate procedures to start the new or used generator’s engine. Once the new or used generator reaches the correct voltage and frequency (for the end use application) the control system signals the switch to transfer from the normal source of power to the generator. The engineering behind an automatic transfer switch is quite complex as time delays and other components play a pivotal role in obtaining instantaneous backup power

Frequency and Voltage Sensing:
One of the main functions of the control panel is the detection of a drop in voltage or a complete failure of the normal source of power. In general, all phases are monitored. Failure points are defined as a drop in voltage below a preset setting on any phase. Voltage and frequency information is provided by the sensors in the control panel to determine load availability. The minimal voltage and frequency must be attained before transfer of the load to the new or used generator. This is to ensure the generator set has the ability to accept the load.

Time Delays:
Automatic Transfer Switches come with a wide variety of time delay systems. Time delay functionality is a necessary feature for an automatic transfer switch because of false alarms triggers with the normal power source from a utility company. The most prevalent time delay overrides any momentary normal outages that would cause a false engine start and thus transfer the load. This time delay is anywhere between 0-6 seconds, with one second being the most common setting. The delay must be short enough to connect the backup power source all the while meeting city, state and federal codes. James Naas, Generator Sales Manager at Diesel Service and Supply, stated that many companies will also buy an uninterruptible power supply battery to curb any time delays.

Once normal power is restored, another time delay is needed to ensure the load is stable enough to switch from backup power. Typically, this delay is between zero to thirty minutes. The control panel should automatically bypass this time delay in returning to the normal source if the new or used generator fails and the normal source of power is working properly again.
The third most common time delay involves a cool down period for the engine. During this time period the controls run the engine unloaded before shutting it off.

In most instances it is usually desirable for the load to be transferred to the backup generator as soon as the proper voltage and frequency are reached. However, in some situations end users want to sequence different transfer switches onto the backup generator. When this application is required the controls should include an additional time delay which can be adjusted on each transfer switch so that the loads can be transferred to the new or used generator in whatever order desired.

Engine Control Contact Point:
The controls will include a contact point that signals then engine controls to start when normal power from the grid fails. In most modern designs this contact is usually a dry contact which closes upon failure of normal power. When the contact closes it completes the circuit from the cranking batteries to the engine start control systems. Conversely, this contact point opens to shut down the new or used generator. Regular testing should be done on the contact point to ensure there is no failure of the circuit. In some transfer switches there are backup contact points in duplicate circuits to ensure there is no one single point of failure.
Control System Testing:
Periodic testing should be a regular part of maintaining an emergency power system. All control systems should include a manually operated switch to simulate normal source power failure. The controls described in this article are considered the standard for operating an automatic transfer switch. The guidelines described should be the minimum standard that end users should consider before purchasing an automatic transfer switch. There are a number of specific control systems available to handle a variety of applications. It is best to speak with an electrical contractor to determine which control system suits your specific needs.